CELEBRITY GIST: They say karma is a bitch, and that seems to be the case here with Tonto Dikeh; who is usually the one that picks fight with her colleagues in Nollywood. A controversial tweet from Tinsel star actor, Gideon Okeke in reaction to Tonto Dikeh’s engagement to Mr X – appears to be a diss to Tontolet who have also responded in her own ‘Poko’ way. 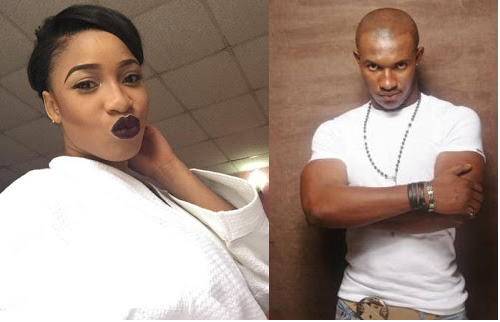 We have provided below, the Gideon Okeke tweet that seems to be steering up beef with Nollywood Controversy Queen – Tonto Dikeh. Read his tweet, along with Tonto Dikeh’s reaction afterwards; and let us know if – Gideon Okeke was indeed dissing Tonto Dikeh’s engagement to Mr X, or not?

Following the announcement of Tonto Dikeh’s introduction to the family of her fiance – Mr. X Churckill, vice versa; Nollywood actor Gideon Okeke took to Twitter on August 10 to react to the news of Tonto’s engagement to a man who has many women in his life, and has been married before. Here’s what Gideon Okeke said:

Ha! So Aunty last last marries "Mr X". Not like it's stops the rain from pouring tho…☕️

Knowing how Tonto Dikeh is, she had to fire back at Gideon Okeke without directly mentioning his name. In reaction, Tontolet yesterday August 11, posted the following message on Instagram, along with this photo:

“Watch who you are talking to. Be mindful of who you are letting into your life. If you ever sit down with someone to talk and they are belittling and bitching abt people they used to be close to Or never close to….Chatting sh*t or telling truths that you don’t need to know…Generally hating and gossip talking about whoever…Don’t tell this people anything about you. Recognize that they will do same to you when you aren’t flavour of the month Anymore.. Some people will try to use you,When you can’t be used/used anymore,the selfish and disloyal behavior will begin. I say try to use you,because people who are trying to bring you down are already beneath you… No one higher than you in wealth,Success,Life will ever belittle their selves to stoop so low to trash or destroy you unless you steal from them..

“The people who are speaking negatively about you aren’t in a Good place. Spiritually they are Losing out. Let them talk Sh*t These are the same people who will do whatever they can to try and get people to like them. Never willingly let them into your life unless you enjoy drama. If you have these people in your life,Remove them…FAST They will never help your life,Just attempt to hinder your progressions.

What do you have to say about Gideon Okeke and Tonto Dikeh ? Share your thoughts on Nollywood Community!